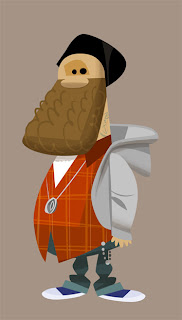 Is this part of the hipster 'movement'? The fellas that look like mechanics but most likely run design agencies or niche clothing outlets. Often covered extensively in tattoos and they wear woolly hats even out of woolly hat weather. I suspect that they came to be as some sort of answer to the simpering metro sexual hipster guys, a polar opposite... two sides of the same grubby coin.

I can't get hold of you dude answer your email or get your phone switched on or create a fire in Bolton and morse code smoke signals on either a Tuesday or Wednesday the 7th 8th of the month and I will reply by graffiti on Marks and Spencers grocery isle in Bury.
Get in touch man, Si (lazy-shit-web-designer-plagerizer)

super! I always dig the way you get such nice, solid, dimensional forms into your brilliantly economical designs.