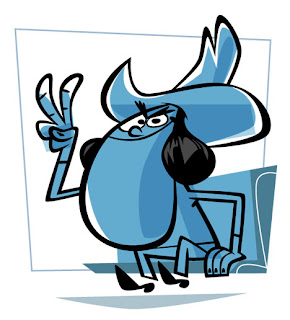 Two? On a bus seat that isnae connected to the floor... two? Cowboy with Dickensian hair doo? What does it all mean?
Posted by Mick at 6:43 AM 12 comments: 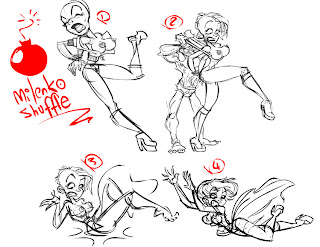 I drew these after seeing some pictures by my great show biz buddy {pauses for appplause and 'knowing' show business guffaws} and chief doodler of stretched 'just right' anatomy {Further applause, shouts of 'HURRAH' in capital lettuce}. Why not go take a peep at his blog? I have put his link there on the right... go on don't be afraid. {Exits stage left to tremendous silence and tomatoes}
Posted by Mick at 9:12 AM 6 comments:

A) Get all excited by Albruno Rubbles and his high flying new york address. Immediately begin drawing girls in order to curry favour and cement a gaff to crash at in the big apples should they ever let you out of the institute.

B) Realise the error of your ways blundering into what will inevitably be some heavy heavy competition so far as capturing the human form in lines.

9) Sack previous efforts and hope no one noticed the lame arsed endevours you tried to pass off as artictricumen (which is a pretend word).

C) While no one is looking twist the initial weak pose and then use red to drape ‘interest’ all about the place. Sure no one will give a pip but the bright colours may just give you enough minutes to phone a joe baxi and get the feck out of dodge.

F) Continue with drapery upon realising the battery is low on your phone and taxis will save you not.

Tuesday) Abandon ship and take entire different direction. Up until now I doubt anyone was paying attention anyway… what we call the ‘honeymoon period’ of any drawing is often left to the folly of youth or the blind stagger of divorce/ second chance.

E) Yep, now we’re talking, start thinking of that firm thigh striding sauce bottle you picked up a some point in your life. Mmmmmmm I’ll never forget whatsername… allow three to five minutes for blurred memories and delusion of stallion like performance.

W) Indulge time honoured tradition of barely tinkering with the drawing whilst whistling a confident tune. ‘ Yeah sure it’s a new design’ this secures extra money depending on the look in your eyes and the wording on the invoice.

Hat) After being knocked back for confident whistling whilst barely tinkering, add hat. Who’s gonna notice right? Also note ‘gothic colour scheme’ it pays to keep up with what
the fashion unconscious alternative scene is up to in your local sewer.

13) foolishly travel down dead end street using sex clobber to grab attention. Not realising that they even sell cough medicine in modern times using lubed up cheer leaders
and sound tracks of filth.

13) Ok fair enough lesson learned. sex no longer sells. It merely reflects the attitudes of the bourgeoisie and their world killing attitudes to putting a price on everything from boobs to bird song. With this in mind revert to one of your own personal kinks, in this case tennis players. yes yes ok, tennis players in a scantily clad fashion. yeah alright and without a racket… yeah and a skirt, jeez! I just appreciate the contrast of white against tanned hide OK!

I was just reading about a plant called 'siliphium' that is now extinct. It is a great shame that this particular plant is no longer with us when you read of it's many wonderful uses. Here is the list- Aside from uses in the kitchen as an ingredients in sauces and as a garnish it was also good at treating coughs, sore throats, fevers, indigestion, fluid retention, aches and pains. the sap was used to remove warts and other growths and was also useful against snake bites..... here is the best bit though 'when mixed with wine it was said to make serpents explode' !!!! Brilliant... also it put sheep to sleep and made goats sneeze. Other uses included restoring hair and treating leprosy.
It is no longer with us but grew when it did in Libya. I just went searching for images on the internet but as it is extinct it was a small and futile gander. Here is another picture just in case.

Clicky for hidden message
Posted by Mick at 7:35 AM 8 comments: 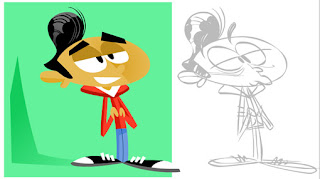 I was holding out until it at least got a little bit average but alas it has taken a turn for the downwards. i could lie and say this is some pre-production work for an up coming project, and it is but you wouldn't believe that. We have both grown apart, we used to laugh all the time, now what with the kids, the over time and of course the galloping infedelity... i always used to think that infidelity was when your radio didn't work... and i don't know why. i know the kids from fame did a song called 'high fidelity' it went-
high fidelity hi hi hi hi
high fidelity hi, hi fidelity
high fidelity hi hi hi hi
keepin it right
wearing your tights
alllright
something like that, not very inspired i know. What that has to do with broken radios I have no clue.
Posted by Mick at 6:10 AM 3 comments:

All flash is grass 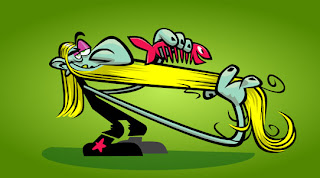 Like Heinz, we never reveal our sauces... that's not right is it?